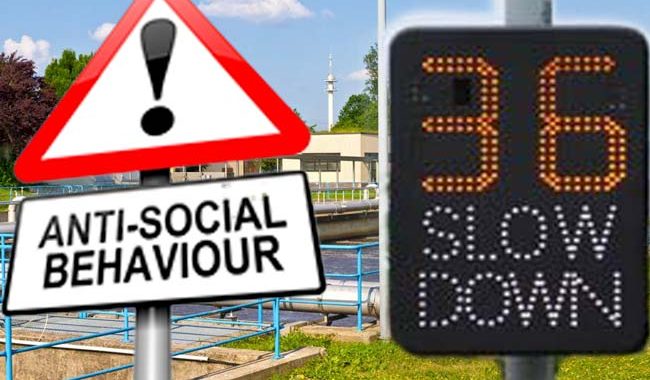 One of the main roles of a parish council is to ensure residents’ health and safety. This is an ongoing matter.

When Fairfield was planned and designed the planners had this very much in mind. Hence, they restricted access to Fairfield to two locations – the roundabouts on Hitchin Road with Dickens Boulevard and Eliot Way. Within in the village they introduced many footpaths and cut through so that people could walk from A to B without the need of using the car

Their aim was largely met, Fairfield has an extremely low accident and crime record compared with other conurbations.

This does not mean that Fairfield is danger free and one of the first actions the council took at its formation in 2013 was to produce a Disaster Plan should some major incident occur. This is reviewed annually.

However, times change and with development being agreed on the eastern side of the Hitchin Road, it has brought new dangers and concerns which we continue to address.

The Stotfold/Hitchin Road now dissects the village instead of passing its perimeter. Traffic along the road has increased and our own Speed Watch team have recorded excessive speeds along the road. One of main problems is that little housing is visible from the road thus giving motorists a subconscious invitation to speed.

Add to this the decision to build a second senior school in Stotfold (Pix Brook Academy) and stop using Samuel Whitbread School, means an increasing number of children now cycle to the two Stotfold schools along the narrow footpath of Hitchin Road.

Long before Pix Brook was built, we had entered into talks with Central Bedfordshire Council (CBC) of the dangers this presents, and we endorsed the plans of the Etonbury Greenwheel team to build a bespoke cycle path on the inner side of the hedgerow. However, after four years, this is no nearer to fruition as the landowner is unwilling to surrender the land to do so.

It is time to look at other alternatives. One controversial one would be to remove the trees and hedgerow and widen the footpath that way. This is bound to bring objections from environmentalists.

In January 2022, a working group of councillors met with CBC Ward Councillor Steve Dixon and a member of CBC Highways to discuss and look at all proposals to bring the speed down by a combination of highways measures. This meeting proved disappointing, but we are continuing to talk.

Within Fairfield Park, the situation outside the Lower School in Dickens Boulevard and around the entrance to Tesco is constantly under review and we have ongoing discussions with our Ward Councillors as to how we can improve this

On the health front, we are constantly reminded that the major Letchworth Water Treatment Works is within yards of our boundary. This became a major issue during the summer of 2017 and the Council led meetings and involved our then MP, the Right Hon Alistair Burt, in discussions with Anglian Water over issues. Eventually, Anglian Water introduced new machinery and new operation methods that has improved the situation considerably. We continue to monitor this situation closely.