Les Pike, dressed from head to toe in a Union Jack, and Fairfield Lower School Ruskin Drive pupil, Arya, lit the Jubilee Beacon to start four days of celebrations for Her Majesty the Queen’s Platinum Jubilee.

About 300 residents and friends joined the torchlight procession around the original part of Fairfield before the ceremony and on their return still had plenty of energy to give great renderings of  We Are the Champions by Queen and the Neil Diamond classic Sweet Caroline before the the beacon was lit to a tremendous rendering of God Save the Queen.

On Friday the cricket ground was full with an ever changing audience as people watched the three films,  Moana,  Back to the Future, and  Mamma Mia.

Here are some of the pictures taken during the weekend (Click on Thumbnail to enlarge). 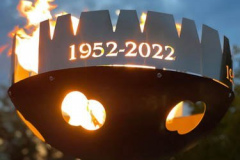 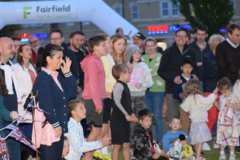 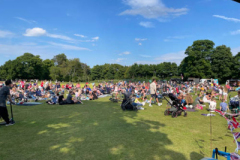 Ownership of the Fairfield community Hall has, at long last, been passed to the Parish Council. The process has taken over four years to complete, but Councillors Shawn Reader and Vice-Chair Penny Daffarn, signed the transfer deed at our last FPC meeting on May 12. The handover was completed by solicitors this week.

Defibrillators have been installed on the wall of the Fairfield Hall compound and on the waste bin store at Harlington House on Fairfield Gardens.   Both have been provided by the Council and will be an aid to both areas. Previously, the only defibrillator on Fairfield was the one outside the Tesco store. However, in […]

Appointment of Tony Hopkins as a new Parish Councillor

We are delighted to announce that at the December Parish Council meeting Tony Hopkins was Co-Opted as a Parish Councillor for Fairfield. Tony has recently moved to Fairfield Gardens and is keen to get involved with continuing the good work carried out by the council in ensuring the views, needs and concerns of the residents […]

Appointment of Anna Papakosta as a new Parish Councillor

2021/22 could be said to be a year of two halves (using a football analogy). We started 2021 with many issues still surrounding the COVID 19 pandemic, but as the year progressed, with the vaccination programme in place, we were able to bring the community together again. Fairfield Parish Council saw two changes to its […]

As we hopefully see the restrictions of Covid-19 lift from the country, it seems appropriate to start with a reflection on what we have had to endure over the past 24 months or so. The resilience and spirit of residents throughout Fairfield, Central Bedfordshire and indeed the country, has been incredible. The challenges Covid-19 has […]

Currently we are looking into options for either an outdoor gym or trim trail (or both) for the many joggers, keen runners and keep fit merchants that regularly pound our streets and boundaries. The council is more than keen to know your thoughts. Later there will be a full consultation on the subject.

Nature Trail for the Orchards

Three years of hard graft by experts and volunteers has seen our treasured Orchards go from an overgrown and unkempt wilderness to well managed sites that are getting admiration from experts in the field One of the main aims in the restoration was to make them educational, not just for children but for adults as […]

Fairfield’s outer shelter belt has never been so well trodden!  We are lucky to live in such a lovely place which makes it so easy to walk.  You can start this walk anywhere, but if you aren’t sure, start at the roundabout at the entrance to the Park and just stick to the footpath until […]

Keeping our local traders alive is vital during this period!   The main milk delivery company for Fairfield, Marlow Dairy from Hitchin, also deliver a lot of groceries and other dairy products including eggs could be useful in time of emergency. However, demand is so great they have had to restrict this to milk for […]

New smell to blight us! Plus latest from Anglian Water