Story of FairfieldThe Unmarked Grave of a Polish Soldier

The Unmarked Grave of a Polish Soldier 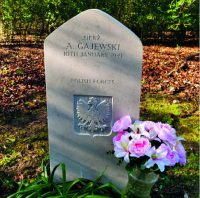 When I first retired from the Army and moved to Fairfield in 2011 during one of my walks I stumbled across a lone military grave, that of Sierzant (Sergeant) Antoni Gajewski, Service Number P/780790, Polish Air Force (PAF). The grave is situated in what the Commonwealth and War Graves Commission (CWGC) record as Stotfold (Three Counties Hospital) Cemetery and my military background (28 years in the Army) inspired me to research further.

What is often overlooked or indeed not known by many is that Royal Air Force (RAF) numbers were bolstered by the contribution of Polish Airmen and Ground Crew. There were other non-UK contributors e.g. Czechoslovak Airmen but to focus on Sierzant Gajewski and the Polish Air Force (PAF).

The following account has been put together from numerous sources and is not claimed to be a full and accurate account but a result of my own findings. The assistance of other Fairfield Residents and the Commonwealth War Graves Commision (CWGC) has been instrumental in my research for which I am most grateful.

“Judging by his rank at the time of death this would suggest he joined the Polish Air Force prior to the break out of war in 1939 as there was no direct entry in this rank.”

Sierzant Gajewski was born on 27 February 1900 in Zagórze (Sosnowiec), Southern Poland which is approximately one hour away from Kraków by road.  Judging by his rank at the time of death this would suggest he joined the Polish Air Force prior to the break out of war in 1939 as there was no direct entry in this rank.

After the German invasion of Poland in 1939 a large number of PAF pilots and ground technicians escaped to France via Romania and Hungary. There are four recorded methods of escape and undoubtedly Sierzant Gajewski fell into one of these categories but going by dates available I would hazard a guess it was the first or second category:

• Mass movement of volunteers which lasted from October to the end of December 1939.

• Small groups organized by the Underground Movement during the first few months of the war.

• Individual escapes assisted by the Underground Movement throughout the war.

Subsequently it is anticipated that between late 1939 and early 1940 circa 8500 PAF escaped France by various routes and made their way to England.

Records suggest Sierzant Gajewski was initially part of 308 Squadron (Polish), Polish Ground Training Centre, Blackpool, Lancashire which makes perfect sense as it was the holding depot for Polish aircrew prior to being despatched to stations or depots across the UK for training or operations.  Information on his role and service history thereafter and how he came to this area were scarce in my initial findings.

The RAF and Commonwealth Air Forces Roll of Honour has no detail of his Unit but does record his trade as ‘Mustang III FB374’, an American built aircraft which was also in service with the RAF. Oddly, Sierzant Gajewski is listed in the Causalities Section of the CWGC Register for Mustang III FB374 as an ‘Aircraft Accident / Loss’ Entry which is in contradiction to his discharge from the forces on medical grounds. Listed alongside him in the same register is just one single name, Kapral (Corporal) Antoni Bardeckim of 316 “City of Warsaw” Polish Fighter Squadron.

This Squadron engaged in defensive duties over South-West England. Kapral Bardeckim is buried in Cambridge City Cemetery with cause of death recorded as ‘Lost in Aircraft’ although this was in 1944. As the same aircraft is mentioned in each entry, and their records align I concluded it was a strong possibility that Sierzant Gajewski served in the same Squadron although it was not formally established until February 1941 so perhaps a preceding Unit which would potentially explain how he came to the area.

Many I have spoken to have a general assumption that as he was PAF then he must have been a pilot. Despite these assumptions and the mention of Mustang III FB374 in his war records I remained sceptical and was doubtful that Sierzant Gajewski was an actual pilot at this point in his service. My main reason for this was because it was the ‘younger’ generation who were selected to undertake the role of pilot with the RAF.

Sierzant Gajewski would have been 39/40 years old and although speculative it may be that he most likely served as Ground Support. My speculation was correct, following invaluable assistance from a Fairfield resident  I obtained further information that confirmed he served with RAF Maintenance Command as Ground Crew stationed at RAF Henlow.

Sadly, his time served with the RAF was short and he is recorded as being discharged on medical grounds (deemed physically unfit) on 15 July 1940. There is no further detail on the nature of his illness plus nothing to suggest that he was suffering from any mental illness often associated with patients of the Three Counties Hospital. The term ‘physically unfit’ is pertinent, his discharge is not recorded as ‘mentally unfit’.

It is also relevant that at the time parts of the hospital were a military hospital so therefore not necessarily a dedicated asylum. Further research confirmed that he was initially admitted to the hospital with acute melancholia (a subtype of depression) and later died of pneumonia.

The escape from Poland was a dangerous one, the first winter of the war was harsh, hunger and appalling conditions had to be overcome in order to survive. Perhaps this journey he courageously undertook had irreversibly impacted on his health, both physically and mentally.

Sierzant Gajewski died at the hospital and was laid to rest in the grounds. The grave records his death as 10 February 1941 however Polish War records state ‘died in hospital 10 January 1941 (in lieu of 10 February 1941). This contradiction in date confused me but the research was about to take a fortunate turn.

Via Facebook I received a message from a member of the Commonwealth War Graves Commision (CWGC) who had spotted my article and made particular note of the date of death anomaly. A visit to Bedford Archives confirmed that the date of death, as recorded in Polish War Records, was indeed 10 January 1941. This information was passed over to the CWGC Commemorations Team who corrected their archives and a request was placed to correct the headstone.

“I had always hoped the headstone would be corrected, it was something that was important to me and something that I felt Sierzant Gajewski truly deserved.”

The CWGC honour and care for the men and women of the Commonwealth forces who died in the First and Second World Wars, ensuring they will never be forgotten. Funded by six Member Governments, their work began with building, and now maintaining, cemeteries at 23,000 locations all over the world. I had always hoped the headstone would be corrected, it was something that was important to me and something that I felt Sierzant Gajewski truly deserved.

One day in February 2022 whilst walking my dog I was approaching the grave and noticed that the headstone appeared more clean and white than previously. As the grave often has flowers and lanterns left on it my initial thoughts were that it had been cleaned. However, on closer inspection I was delighted to see a brand new headstone in place correctly recording the date of death as 10 January 1941. A poignant moment for me, I raised a salute to Sierzant Gajewski feeling a sense of completion.

The contribution Polish Forces made to the war effort should never be underestimated. The decision to escape Poland was so that these forces could assist in the defence of France and Britain. Sierzant Gajewski was part of the significant and integral role the Polish Forces played in World War 2 and it is fitting that he has been laid to rest in a recognised War Grave.

It is a lonely secluded spot, separated from the other civilian graves by virtue of its status as a War Grave. Sadly, Sierzant Gajewski never made it back to his homeland and is now at rest and in a small part of Fairfield there is an everlasting memorial to the service he gave.

I visit him every Remembrance Day to pay my respects to him and to remind him he is not a forgotten Airman buried in a foreign land. If ever you pass, do take a moment to pay your respect for the sacrifice he made. At the going down of the sun and in the morning, we will remember them.