The second stage of the Fairfield Orchards restoration gets underway shortly with a new tree planting in the West Orchard, where ownership was recently transferred to FPC.

That area was sparse, as it may have been used by the hospital for trees other than apple which are known to have a shorter life. Fifteen stakes have been placed where it is intended the trees will be planted and, while they will be predominately apple, there will also be other fruits and nuts.

Sunday December 11 is the scheduled planting date with the following Sunday being held in reserve if we don’t get them all planted.

Last winter we had a hearty team of volunteers to help with the pruning and we are asking them to if they will help again. But with the population on Fairfield constantly changing there may be newcomers who are interested in this great project.

If you are already a Friends of the Orchard subscriber, or want to get involved, then please email friendsoftheorchards@fairfieldparishcouncil.gov.uk. The more helpers we get the faster the job will be done. If you can, please bring a fork and/or spade with you but there will be equipment available to use. 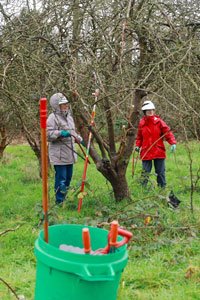 There will be two further workshops in the New Year to continue with the pruning of the trees. The major work will be undertaken by professional arborists but the smaller trees in the West Orchard can be done by volunteers. Bob Lever, ‘Apple Bob’ will again be leading and guiding these two workshops.

These will be held on Sunday, February 12 and March 12 2017. Further reminders for these will be sent out nearer the time but if you can help please make a diary note now!

Work will also be taking place at the Hardy Way end of the Orchard. This will be a tidying up and making safe exercise and may look severe at one stage to the eye. But there is a lot of old builder’s waste there that needs removing or making safe, a dead tree and some shrub work that needs doing. Eventually the area will be incorporated into the West Orchard.