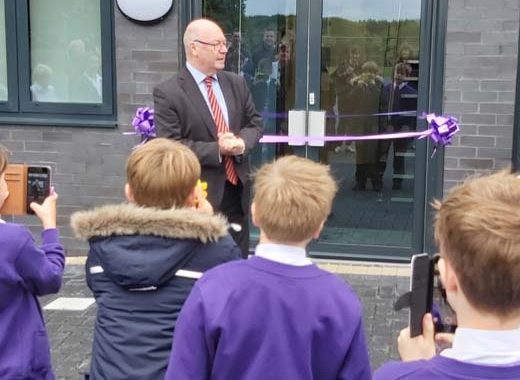 He was watched by pupils and their parents at the school plus representatives of local councils including Cllrs Dack (Chairman), Hunt (Vice-Chairman, Andrews, and Daffarn from Fairfield.

The school is currently operating from a small site on the Etonbury School campus but work will start shortly on its own building on land the other side of Stotfold Road behind the new home for Stotfold FC.

Currently the school just has four class rooms each capable of taking 18 pupils from Year 5 who left the areas lower schools in July. Currently it caters for children up to the age of 16 but is prepared for the proposed change to a two-tier system scheduled to happen over the next  few years.

Children were invited to count down from five before Alistair Burt cut the ribbon and declared it open.