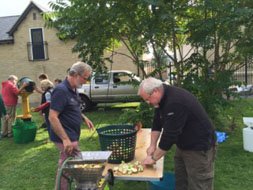 Watch Out! The Vikings are coming and will be in combat on Fairfield this Saturday.

The Royston based Gesithas Herred of the Vikings will be performing twice as the centre part of Apple Day that starts at noon and will culminate with live music from the popular local group the Trippin Rigby’s plus a local singer Luce, who both will be performing on the cricket pitch, from 4pm to nightfall, approx 7.30pm.

Thanks to our helpers, we have apples galore ready for crushing into Apple Juice for drinking or making into cider that is part of the long tradition of Apple Days nationwide. Our ancient orchards date back 150 years according to the experts and this year, despite the long dry and warm spell, the fruit has been magnificent and has already made many an apple pie.

The Vikings will be performing twice, first at 1pm and then again at 3pm. In between, Fusion Dance will be performing at 1.30pm. Fusion are celebrating their 30th anniversary this year and have been holding weekly classes in the Community Hall since it opened in 2012.

At 2pm the Fairfield Community group, Flow Art, will be performing. They last performed at the Christmas Lighting Ceremony but were at the end of the programme on a bitterly cold day and only a few diehards remained to see them perform. They started on Fairfield as a hoopla class but have widened their repertoire now as we will be able to see.

The food vendors, who keep residents happy on weeknights, will be out in force offering everything from crepes to Meze. The Fairfield WI this year will be doing cream teas as well as a massive selection of cakes made by their members.

Local residents will also be showing off their wares. We have a range of stalls selling, candles, gin, jewellery, toys, spices, crystals, sweet cones, and much more. Plus our local farm shop, Lower Wilbury Farm, will be present as usual.

Pony rides, that proved popular last year will again be on offer at the Kingsley Avenue end of the cricket pitch. They will be joined by the church, a face painter, arts and crafts, while the local police and fire crews will be on hand offering children a view inside the vehicles. That could get very noisy!

The introduction of live music is a new feature this year but the group, Trippin Rigby’s, are well known to residents who frequent the First Garden City Brewery or Craftys, in Letchworth. Local singer, Luce, will also be performing. They start performing at 4pm and will be sharing the stage for periods up to 7.30pm.