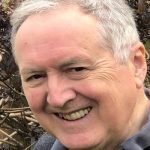 The year started with the four-yearly election for the seven seats on the Council and ended with Covid-19 (more about this later).

Both Chris and Nathan were founder members of the Council and worked very hard to both set up the procedures and help produce the roadmap the Council decided to take by its Parish and Neighbourhood Plans.

Chris became Chair and led the Council’s action against the smell emanating from the Anglian water Treatment Works and helped galvanise action by involving our then MP Alistair Burt and demanding regular onsite meetings until Anglia Water Treatment admitted liability and worked to resolve the problem.

The investigation on whether a legal right of way exists on all or part of Kingsley Avenue is now taking place having reached the head of a very long queue of inquiries made to the mapping department querying its accuracy.

Nathan Hanks is a Transport Consultant by trade, and he drew up detailed proposals to ease parking problems on Fairfield, particularly in the Tesco shop area. The Council at the time accepted these proposals but they mainly remain dormant because of land ownership issues that remain unresolved despite the best efforts of the Council.

Both Sharon and Tom worked on formulating the Council’s Emergency Disaster Plan. We thank all four retirees for their service.

The newly elected Council saw me elected as Chair for a second time. It is an honour to do so but I have made it clear that because of age, health and the need for younger people to get involved with building Fairfield to the needs and demands of the current generation, I aim for this to be short-term to provide not only new thinking but a greater dynamic.

With such a new Council, progress has been slower than hoped on several projects as the new members had to come to grips with procedures and rules.

However, I am pleased to say that we are now moving forward.

We have been continuing working on the East of Arlesey proposals that are part of the Central Bedfordshire Local Plan – their vision for the future on both housing an employment for the next 15 years. We gave evidence to the planning inspectors at public hearings in July 2019 and are now working with CBC in answering the many questions posed by the inspectors in a letter to the Council in September 2019.

Ever since the Council was set up in 2013, we have been conscious of the fact that Fairfield does not have its own facilities for dealing with the death of residents. Until 2015, residents were able to still use the Stotfold Cemetery as a Garden of Remembrance, or for the interment of ashes or for burial.

There is a shortage of land nationwide and finding areas for these facilities is a major challenge to local authorities all over the Country. We have identified a suitable site at the end of Eliot Way near the start of West Drive and adjacent to the existing former cemetery of the Three Counties and Fairfield hospitals.

As a result of a public consultation we are proceeding slowly, first with a Garden of Remembrance and then with the addition of interment of ashes. Full burial facilities will not be added at this stage and that decision will be kept under constant review.

To give the many joggers that pound the boundaries of Fairfield we aim to give them more of a challenge by adding pieces of equipment to form a Trim Trail. The main complication of this work is the structure of land ownership on Fairfield and there has had to be many discussions with the various custodians of the land.

I thank Councillor Amanda Hunt for her work on this with the aid of Councillors Nick Reynolds and Shawn Reader. Hopefully this scheme will come to fruition in 2020-21.

Our renovation of the two historic Orchards continues and now is in its sixth year. Spring this year really saw the Orchards in all their splendour a tribute to the hard work of Councillor Penny Daffarn, her husband Gavin and their band of volunteers.

My predecessor last year reported that the transfer of the Fairfield Community Hall to the FPC had started. Unbelievably, this is still in progress, not because of any unwillingness on our part, but a lack of urgency on behalf of the developers and their legal team.

The Community Hall has been open seven years and required a much-needed refurbishment. The sprung floors had become scuffed and in need of work. A grant of £11k was made to the Trust that allowed for the floors to be re-sanded, sealed and polished and the badminton courts re-marked. We also gave the trust grants to enable the purchase new equipment and changed the lights to modern-day LED that will reduce ongoing costs and update the emergency lighting.

We were also happy to offer our support to the Fairfield Park Residents Association to add both sensory and inclusive equipment to the play areas that are enjoyed by so many and whose upkeep is the responsibility of the Fairfield Park residents via their rent charge. The estimated cost of adding this equipment is £50k, of which a £25k grant has been obtained from CBC and is to be match funded with £12.5k each from the FPRC and FPC. Work is being hampered by Covid-19 restrictions but will hopefully be completed this year

Fairfield was built to a rigid masterplan that has received accolades and awards for its design. It is the reason why many of us moved here, appreciating the late Victorian style of architecture that has been replicated so well to blend in the refurbished hospital buildings. The Council is determined to maintain that uniqueness that sets it apart.

The aim of the Design Statement part of the Neighbourhood Plan was to repeat the standards and aims of the original Master Plan. This is often made difficult by the fact that changes to the country’s planning regulations allow some householders on Fairfield to build extensions without planning permission. This in itself is a peculiarity as some of the properties on Fairfield do not have permitted development rights

If this continues, in time Fairfield will lose that uniqueness and be no different to any other village in Britain. We know that many do not want this. We have made application to Central Bedfordshire Council initially for an Article 4 exemption so that all extensions will require planning approval. This application will eventually have to go to the Department of Environment for ratification.

Just when the council year was coming to a positive end the World was struck by the Covid-19 pandemic. Schools, shops and businesses were closed overnight, people ordered to stay at home. The Council launched an appeal for volunteers to help those most in need during this unprecedented time. People often speak of the amazing community spirit on Fairfield and this was borne out when, within days, we had a list of well over 100 people offering to help.

We trust that no-one has escaped our attention and not had the help they required. Councillor Nick Andrews has capably taken on the task of organising the volunteers and we wish to thank him, plus FPRA committee member Jerry Bygraves, a retired pharmacist, who has been collecting prescriptions of those being shielded from local pharmacies, as well as from Letchworth and Lister Hospital.

Then there was the amazing community project led by the Barhey family of making face shields during the time when the shortage of PPE was a national crisis. The figure of shields made totals well over 4,000. We thank them and their team of volunteers for a truly magnificent effort.

Regrettably, Simon Little, stood down from the council recently thus creating a vacancy. We will be filling this by co-option but have delayed doing this until the worst of the Covid-19 crisis is behind us.

Finally, I would thank my colleagues for their support as well as our clerk, Katrina Henshaw, for her diligence and professionalism in dealing with both our electors and the many bodies and organisations we work alongside.